Windows XP started as two different projects before Microsoft consolidated them under a single banner. It went on to become one of the most popular Operating Systems in the world, sought after for its ease of use. XP was so popular that many people continued to use it even after Windows Vista and 7 came out.

The ‘XP’ stands for ‘Experience’. It was designed to merge the user-friendly GUI of Windows ME with the security and reliability of Windows 2000. The original tagline (Prepare to Fly) was scrapped after the 911 attacks occurred. Instead, Microsoft went with ‘Yes You Can’. Several versions of the operating system were released, including Starter, Home, Professional, Media Center, and 64-bit.

The Home Edition was made for people that wanted to use Windows XP at home. XP Professional targetted business settings. Media Center came with multimedia features and functions. 64-bit was compatible with Intel Itanium processors.

By the time Microsoft ended support for the operating system in 2014, it still had such widespread use that individuals, businesses, and government agencies protested. XP is still present in some residential and office settings today, though it is not as prevalent as it used to be.

When it first came out in 2001, Windows XP was a gamechanger because of all the features it brought to the table, including:

2. Reliability – Because XP rose from Windows 2000’s Kernel, which was already renowned for its reliability, it proved to be more reliable than its predecessors. Users were guaranteed faster start-up and hibernation. You could also switch users quickly and easily.

3. Media – XP came with Windows Media Player that consumers could use to search, play, store, and manage their digital media.

4. Messenger – The operating system had collaborative tools that enabled instant messaging and communication via video and audio. It also permitted the sharing of applications.

5. Network and Support – XP availed automatic configuration of wireless networks at home (802.1x) whilst also allowing consumers to share information across computers and devices. You had offline access to files and folders that had been shared on a network. XP also included help and support mechanisms, not to mention features that people could use to recover their data in the event of a malfunction.

6. Speed– XP was a fast operating system with quick responses even when you paired it with environments that required the processing of multiple tasks.

7. Tasks – You could operate and manage multiple applications simultaneously.

8. Security – XP came with a firewall that prevented unauthorized access to your system whenever you browsed the internet. The operating system included Internet Explorer 6 which protected your information whenever you accessed a web page.

At the time, Windows XP Home Edition had everything you could possibly want from an operating system. Though, the Home Edition had some limitations as well. Microsoft chose to restrict certain features to the Professional Edition, including:

However, with XP Pro, you could also access a feature that granted the user remote access and administration over corporate desktops and clients on a network.

2). If you had XP Home, your operating system could only support a single microprocessor. XP Pro, on the other hand, supported two.

3). XP Pro has an automated system recovery tool that allows the user to save their computer from a severe malfunction. XP Home had a backup utility with similar functions but Microsoft removed it. With the Automatic System Recovery tool in XP Pro, if your system crashes, you can return it to a previous state.

4). Besides Windows 2000, XP Pro is the only other operating system that permits the use of dynamic disks.

5). You can use an XP Home CD to give Windows XP Home Edition fax functionality. But it doesn’t come as a default function of the operating system. On the other hand, fax functionality is built into XP Pro.

6). With XP Pro, you can use the EFS (Encrypting File System) to protect sensitive documents from unauthorized access.

7). If you have administrative privileges, you can use access control lists to prevent people from accessing servers, files, and directories unless they have the necessary credentials. You won’t find file-level access control in Windows HE.

Along with Domain Membership, Roaming Profiles, and IntelliMirror, XP Pro has a lot of features that you won’t find in XP HE. But in truth, most people that use XP at home do not require the functions that XP Pro offers. XP Pro was made with a business setting in mind.

How To Install Windows XP

If you are thinking about installing XP on your computer, you have to ensure that it meets certain requirements including:

Obviously, every modern computer is powerful enough to run XP. However, if you have an ancient machine, check the specs to ensure that the device meets the basic requirements. If your computer is strong enough to run Windows XP, you can start the installation process, which includes the following:

Step 1: Start by inserting the Windows XP CD. Select the option that allows your computer to boot from the CD.

Step 2: If your system passes inspection, the setup will begin. You don’t have to do much besides pressing F6 to install third-party drivers.

Step 3: Depending on your computer, it may take several minutes for the setup to load all the files it needs to start the operating system.

Step 4: Eventually, you will get a dialog box welcoming you to Setup. Here, you can either quit or start setup. The ‘Enter’ button will launch the setup.

Step 5: The setup will reveal the license agreement. Read it and press F8 if you want to continue.

Step 6: Choose the location where you want to install XP

Step 7: If you have created a new partition, you have to choose between two file systems, namely: NTFS and FAT. You can choose to format the partition. Once this is finished, setup will copy all the relevant files to the location you selected before rebooting.

Step 8: If all goes well, the computer should boot from the drive with XP.

Step 9: At this point, you can just follow the instruction. The GUI setup that follows will ask you to personalize your computer by providing a name and selecting a language. It will also ask you to enter the product key.

Later on, you will have the option of giving the computer a name and entering a password. You will also set the date and time and configure the network settings to suit your situation. 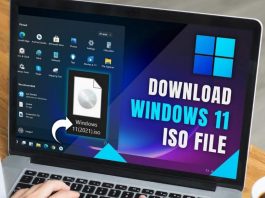