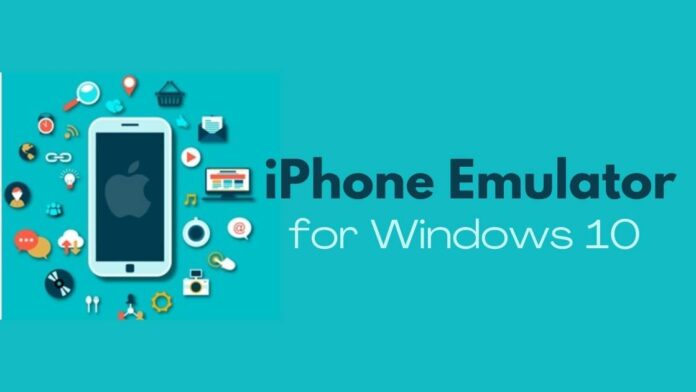 Do you ever wonder about how to run an iPhone app on your personal computer with Windows 10? If yes, then this article is for you as it includes things you need to know about the best emulators for running and testing iPhone apps on your Windows 10 PC.

Using emulators to enable software originally built for one platform to run smoothly on another is something not new.

In fact, it is quite common today and almost all of the users of personal computers especially those running on Microsoft Windows at some point have the need to run software and apps on it that actually belong to another and totally different platform.

One such common instance is the need to run an app built for iPhone over a Windows 10 running personal computer.

In this article, we look at some of the best iPhone emulators for Windows 10 but before we start our main discussion, let us briefly explain what actually is an emulator and what benefits it provides to its users.

What is an emulator?

The primary purpose of this is to run software and apps from the guest platform to run on the host platform as if they were originally running on their native platform.

Most people often confuse between a simulator and an emulator, thinking that both are similar and offer the same benefit.

What are the uses of iPhone emulators

While the general purpose of using an emulator is clear from the above passage explaining what actually is an emulator, it is necessary to briefly highlight the specific objectives which can be derived from using an emulator on a personal computer.

No matter which platform you are using as a host and which platform app you intend to test on it, chances are that you will probably find an emulator for it on the internet.

However, for this article, our main focus would be inclined towards discussing the best iPhone emulators for Windows 10 running personal computers.

If you are looking for some reliable emulator to run iOS apps on your Windows 10 running personal computer, then we recommend you to look no further than the Air iPhone emulator.

Air iPhone is an Adobe AIR application with the capability of reproducing the iOS GUI on your Windows 10 PC.

It is one of the most suitable emulators for developers looking to test their iOS app on a personal computer before its final release.

Other than being compatible with running over Windows 10, the Air iPhone emulator is also suitable for working on Windows 7 and Windows 8.1.

How to download and install the Air iPhone emulator for Windows 10?

Pros of the Air iPhone emulator

Cons of the Air iPhone emulator

While TestFlight is another reliable emulator app for running iOS apps on your Windows 10 PC, it is actually also a great advantage to beta test iOS apps by developers using Xamarin to develop their apps.

Aside from all of the above, the TestFlight emulator is owned by Apple itself which assures its reliability index for both new and old users.

How to install the TestFlight emulator?

TestFlight emulation service is quite technical and to use it, one needs to create an App Store distribution profile.

To install the Xamarin TestFlight emulator, follow these steps –

Pros of the Xamarin TestFlight emulator

Cons of the Xamarin TestFlight emulator

Appetize.io is comparatively an easy to use and super convenient emulator app for running and testing native mobile apps in your Windows 10 browser.

The Appetize.io emulator requires no installation of the software and any user can directly upload their iOS app on its website, stream within seconds and embed it anywhere.

How to use the Appetize.io emulating service?

Pros of the Appetize.io

Cons of the Appetize.io

iPadian is often regarded as one of the finest and most recommended iOS emulators for Windows 10.

Ask any expert on any forum on the internet and you will see how much the iPadian iOS emulator for Windows 10 is actually appreciated for its individuality in this niche.

As a matter of fact, iPadian is more of a simulator rather than an emulator for running the iOS apps on a Windows 10 running personal computer.

However, the thing that makes it different from other emulators is that it has its own app store that contains your favorite apps.

How to install the iPadian iOS emulator for Windows 10?

Pros of the iPadian iOS emulator

Cons of the iPadian iOS emulator

While most users ask about the legality of using emulators, the simple answer to this query is that it is totally legal.

The only important thing to learn about using the emulator is to find the right one that supports your PC and can fulfill your needs as well.

Then the last thing that remains is its successful installation and you are good to run and enjoy using your favorite iOS apps on your Windows 10 running personal computer.