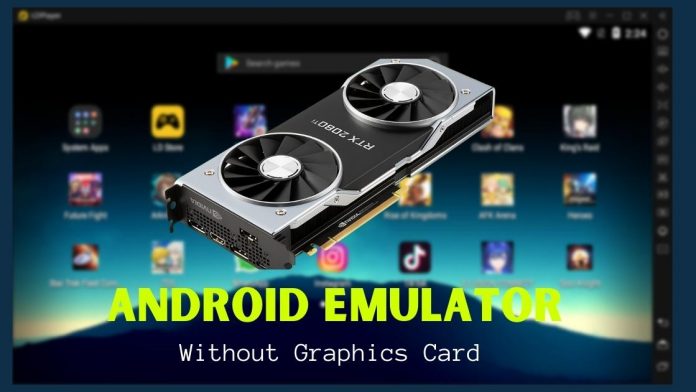 Android emulators are a reliable way to run Android apps on Windows and macOS. There is also a range of emulators that can be run on a PC without a graphics card. Emulators are capable of running tasks on low-end CPUs. These emulators can install on your pre-installed graphics driver.

Do you want to feel the experience of playing the best games such as Mobile Legends or PUBG Mobile on your PC but still blocked from overrated settings? Relax a bit! Some lightweight Android emulator applications currently exist, which supports the PCs having RAM of 1GB and 2GB.

Well, here is the list of the best free Android emulators for low-specific PCs, like 1GB to 2GB RAM. It can be run on Windows 11, you have to try this!

If you are looking for an emulator for Android games, LDPlayer would be among the best choice. This emulator is famous as an Android gaming emulator.

The speed and stability of the LDPlayer are one of the obvious benefits, among others. This software also features multitasking functions. You can access more than one window in the same game within the emulator.

LDPlayer is a secure Windows Android emulator that does not include too many ads. It contains no spyware.  LDPlayer offers comparable performance compared to other emulators and provides fast speed for operating Android games on lower-end PC.

At first, there was Leapdroid, one of the lightest emulators for Android and possibly a newcomer who is worth a look.

The advantages of this emulator include being fitted with numerous improvements and optimizations to ensure its streamlined and smooth operation provides a good benchmark score.

Surprisingly, you can play two games side by side to play the same game in one view with different accounts.

Andy is the next lightweight emulator on the list, allowing users to explore more features of android device with it.

Andy’s benefits include the full support of the Android interface, and it provides the remarkable ability to use a smartphone device as a game controller via connecting it with Bluetooth and Wi-Fi.

Andy had some issues with the game when it first came out. However, they were able to establish themselves as one of the best emulators of Android in 2016.

BlueStacks one of the best and well-known android emulators of all time.

You may admit that Bluestack is Android’s lightest and most successful emulator undoubtedly because this android emulator has been everywhere for quite a long time period and frequently gets performance updates.

Finally, you can also download Bluestacks 4, for free of cost from the official web page, which is offered in many options, including both the online installer and the offline installer.

At least 2GB of RAM must be available on your computer to install Bluestack.

NoxPlayer is a lightweight Android emulator that you must give a chance, especially if you are a gamer.

There are utilities and add-ons designed specifically to assist gamers in controlling the game with the keyboard and mouse.

One of the benefits of Nox is its wide-ranging feature set. For example, to the right side of the NoxPlayer, a charming bar can be used specially to access a variety of features in the NoxPlayer Emulator.

MEmu is fully compatible with Intel and AMD processors, and their most recent release is Android 5.1.1 Lollipop.

MEmu also comes with root access and a full sidebar display with a wide range of extra functions and features.

MEmu has quickly established itself as the best Android emulator for both productivity and gaming.

If you run into any issues, MEmu has a forum where you can get help and a blog where you could keep up with new releases and other news.

Genymotion could be a very good and lightweight Android emulator if you work as an application developer.

The reason for this is that you can examine applications or games on a variety of devices without having to own them.

You can establish the emulator to operate with different versions of Android, depending on your requirements.

Droid4x is the next lightweight emulator, and it’s a good option for an Android emulator on a computer.

The support for add-ons, which allows you to control the game on a computer with a smartphone, is one of Droid4x’s most appealing features.

For example, you can use the accelerometer in Asphalt 9: Legends to turn your smartphone into a controller.

We can also use the keyboard as a controller, making playing Android games much more convenient.

AMIDuOS is one of the top Android emulators for Windows PCs with great performance.

AMIDuOS supports both 32-bit and 64-bit Windows and is available in two Android operating systems: Jellybean and Lollipop.

User-friendly interface of AMIDuOS has the advantage that it supports multi-touch as well as pinch to zoom function, making this lightweight Android emulator more functional.

Those of you who have PCs with touch screens will find it extremely useful. That is great!

Finally, because of direct support from the developer, Tencent Gaming Buddy (also known as TGB) is very popular among PUBG Mobile gamers.

Tencent Gaming Buddy supports a variety of games in addition to PUBG Mobile, including  Honkai Impact, Arena of Valor, and many others.

This Android emulator Tencent Gaming Buddy appears to be solely dedicated to the play of games. Therefore, if you want to play social media, you should try a different light emulator.

Can I run Android emulator without graphics card?

Without requiring a graphics card, you can download and install an Android emulator on your PC. There are a range of emulators available that do not need a graphics card; all they need is Intel HD Graphics installed on your PC. BlueStacks 5, Droid4X, MEmu, and a few other emulators are capable of delivering reliable performance.

How to run emulator without graphics card?

Android emulator installation is simple, you just need to follow some instructions and emulator will be ready to use without graphics card. Here is how?

Now your emulator is capable to run without using GPU. Every emulator comes with different layout so make sure you select correct settings.

Therefore, now above mention details have the list of the best lightweight and quick Android emulators for Low- end PCs and laptops, each with its own set of benefits and drawbacks.

However, it depends upon the user whether you are working or playing games; customize it according to your purpose that truly fits your needs and starts working on it.